Back in Production At Last!

WindowDressers is thrilled to announce that we are back in production! 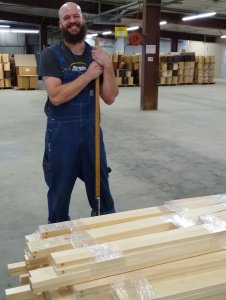 This week, our new Production Manager, Will Van Carpels, took the helm as WindowDressers cut its first order in the new production facility. Will recently relocated to Belfast, ME from New York State with his wife and two children. The family had come to Maine on vacations and fell in love with the area. They had been pondering this move for a while and the pandemic created the right conditions for the change. Will previously worked in residential construction and as a Project Manager for an expanding high-end meat company in New York. WindowDressers is lucky to have Will’s energy, experience, and enthusiasm on our team.

The “cut” that Will led on Tuesday was the culmination of two years of planning and two months of setting up by a dedicated crew of volunteers and staff, known within WindowDressers as the Production Transition Team. Throughout June and July, volunteers Dana Baer, Cliff Babkirk, Chuck Lakin, Zip Kellogg, and Dick Tomeo met at the new Searsmont, ME production facility, along with Executive Director Laura Seaton, to lay out the space, set up equipment, build shelving, and get everything organized for the new season. We give a special shout-out to Cliff Babkirk who facilitated the upgrade of our computer-assisted saw to the latest hardware and software available from TigerStop. Another key player behind the scenes is Steve Shaw who has dedicated hundreds and hundreds of hours to improving our software to prepare for this new season.

On the big day, the Production Transition Team (with Ray Smith standing in for Cliff) joined Will and Laura to run our first order through the line. This first cut was a test of a new production process; a new flow of work through the production line. After overcoming some unexpected software glitches, the line ran smoothly and the first cut was a resounding success. This order will be picked up on Monday and the insulating window inserts will be installed in the Thetford Elementary School in Thetford, VT to keep students warm all winter and reduce the heating bills of the school district.

We are off to the races!