As we all crept out of hibernation after a very long and difficult year, WindowDressers staff and volunteers spent a good part of the summer moving into and setting up production in 4 bays on the second floor of the North Searsmont Manufacturing Center. The TigerStop saw that is used to precision cut the wood for each insert received a necessary software upgrade and getting everything moved in, unpacked, set up and organized was no easy task. However, with usual WindowDressers grit and determination, the job was done in time to be ready for the first Build in early August for the Thetford, VT Elementary School and is now up and running for the rest of the upcoming busy Community Build season. The second floor of the Manufacturing Center is used by a variety of small businesses and provides more open space and comfort needed to accommodate the growth that WindowDressers has been experiencing in recent years.

The previous production facility at the Lincoln Street Center in Rockland served WindowDressers well, but after about 9 years, it was time to move on. While the Lincoln Street Center hosted many of its own Community Builds over the years, for the time being, work at the Kehler Facility will be focused on the production of insert “kits”, the bundles of 4 pieces of wood that make up each window insert.

Board President Sam Saltonstall kicked off the celebration with a welcome and brief introduction. Sam acknowledged the “genius”, tireless dedication and the vast set of skills of WindowDressers’ founding members Frank Mundo and Dick Cadwgan, Board Finance Team members Laura Seaton, Sharon Klein and Treasurer Tatiana Tsay (who ensured WindowDressers survival during the pandemic shut down) and volunteers such as Steve Shaw, Dana Baer, Cliff Babkirk and Chuck Lakin. Without these people, who have given so much of their time and energy over the years, WindowDressers would not be what it is today. Finally, Sam introduced Laura Seaton, WindowDressers Executive Director, recognizing her work and crediting the health of the organization “to her able, determined,and tireless leadership”. 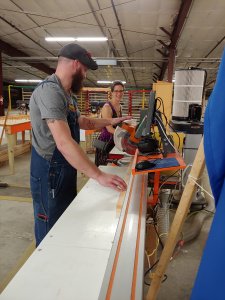 Laura went on to introduce our new Production Manager Will Van Carpels; Program Manager for Maine, Meaghan LaSala (promoted after serving 3 years as Program Assistant); and new Program Manager for Vermont and New Hampshire, Jessica Williams. Will gave everyone a tour of the new facility, showing the spacious and well organized storage areas for wood, gear, jigs and consumable materials like plastic, tape and foam. He then gave an overview of the process by which 10 foot long pieces of stock pine are made into the precisely cut and pre-drilled pieces that make up each insulating window insert which are then labeled, sorted, bundled and put onto pallets, ready to go out to Community Build teams.

After the tour, Frank Mundo, Dick Cadwgan and Sam Saltonstall all spoke to honor Karl’s memory with an unveiling of a new sign to officially name the new facility, The Karl Kehler Production Facility.

As WindowDressers has grown, one of the most remarkable things has been, as Frank Mundo said, “that somehow the right people seemed to show 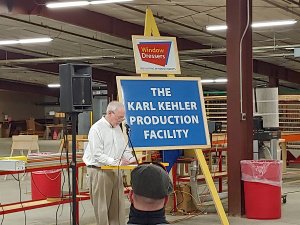 up with the right skill set at just the right time.” There have been so many people like that over the years but Karl clearly stood out as someone who was there at the beginning and went above and beyond in his work for the organization. Frank Mundo and Dick Cadwgan invited Karl to join WindowDressers as Treasurer and not only did Karl bring professional, financial and problem solving skills to his role, but according to Frank, “he had a desire to make things work, not just in the financial area but throughout the organization.” And that “next to Dick Cadwgan, Karl’s contribution had the greatest impact in bringing the organization to life.”

Dick Cadwgan talked about how Karl was part of the visionary team that was responsible for launching WindowDressers out of those two original basement workshops into the many communities that WindowDressers now serves. Those founding volunteers were willing to take risks at just the right moments that kept the organization on its strong and steady path of growth. This new facility is a landmark on that path, part of an on-going journey as the organization continues to be led and guided by staff and board members who are thoughtful and forward thinking, while being sensitive to on-going cultural, social and environmental changes. The vast network of volunteers who sign up to lead and participate in Community Builds each year, embody the spirit of community service and vision of a better and more resilient future for neighbors, communities and our planet.

Frank reminded all in attendance that “Karl was there for us all as we built WindowDressers.” Dedicating this new facility to him as WindowDressers continues to grow seems only fitting. It feels like the perfect gift to give to him and his family as a thank you for all his years of service. This dedication ensures that Karl Kehler “will not be forgotten.”

Those gathered closed the day’s event honoring Karl and marking the 10th birthday of WindowDressers by singing happy birthday and sharing some delicious cake.

___________
Poem for Karl
Read at the WindowDressers Tenth Birthday Celebration and Dedication of our New Production Center August 27,2021

We’re gathered here to celebrate
That while we’ve grown more old
Our WindowDressers, bless her heart,
Is healthy, brave and bold.

Her years now number roughly ten,
Of that we’re all aware,
Cuz most of us have worked quite hard
To keep her in our care.

We’re happy Frank and Dick are here
To help us celebrate,
And also to remember Karl
Whose gifts were truly great.

Not only was he skillful
And as nice as you could wish.
He handled scads of numbers
Like a fisher netting fish

For years and years he kept the books
Did payroll, tracked our treasure
In time and skill and love of this
His gift is hard to measure.

He did so much for WD
Marlene did sometimes wonder
If marriage to this special guy
Had been a careless blunder.

But last year when he fell so sick
And his health was growing dim
She told him of our plans to name
Our Center after him.

So Karl, we give you thanks for all
The ways you gently nourished
Our Board, our Staff, our volunteers
So that WindowDressers could flourish.