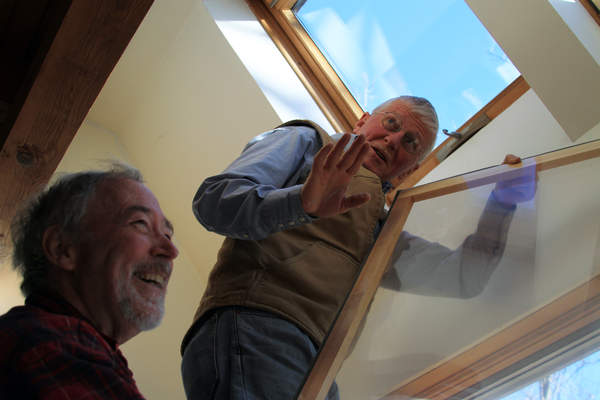 After many years of service, Frank has decided to resign from the WindowDressers Board.  We are so sorry to see him go.

I first met Frank at the Island Institute in 2011.  How excited I was to learn of Dick Cadwgen’s and Frank’s innovative window insert brainchild up in Rockland. Not too much later, Frank came down to Peaks Island where I lived at the time and spoke at the Community Room.  I watched with admiration as he presented the WindowDressers “community build” model to a group of enthusiastic Islanders.  His humor-laced presentation was perfect.  What he described turned out to be just as good as he made it sound, which is why community builds of window inserts continued for 7 years on Peaks, an island of less than 1,000 year round residents.  Frank continued this outreach work and it was largely responsible for the rapid growth WD has experienced over the years.

This past week I reached out to a few other people who know Frank well and invited them to say a few words about Frank.  Marlene Kehler wrote:

Frank Mundo, along with Dick Cadwgan, founded WindowDressers.  He was one of the original visionaries who worked tirelessly to bring the organization to where it is today.  Early on Frank recruited my late husband Karl to be WindowDressers’ Treasurer. I can attest to the long hours and hard work Frank put in with Karl to create, manage and plan for WindowDressers’ financial model and future.  Karl and I also had the privilege of knowing Frank and his wife Karen as personal friends.  Frank brought to every occasion, business or personal, his intelligence, good humor, wisdom, and genuine caring nature.  I value his generous spirit and friendship to this day.  I know that Frank will be greatly missed by the WindowDressers Board and I wish him well with his future endeavors.

Board member Dick Tomeo provided these thoughts on Mundo’s deep involvement early on in WindowDressers’ development:

I first met Frank and Karen around 2011, just about the time that Frank was concluding his tenure as President of the First Universalist Church in Rockland.  The Church has a Green Sanctuary Committee focusing on environmental projects and the idea of constructing insulating window inserts was the brainchild of Frank and Dick Cadwgan.  The Church supported the effort financially and the first inserts were produced for the large windows in the Church Sanctuary.  That led to an expanded project to make inserts available to others in the community and we used Frank’s garage and Dick’s basement for this early, rudimentary work.

In addition to doing hands-on work in making inserts, Frank also used his computer skills to develop a software program to track insert orders and facilitate billing.  Frank worked on this effort tirelessly, including countless hours in uploading production data.  The program wasn’t perfect and had its bugs, but without it WindowDressers would not have been able to expand production as it has.  When WindowDressers was formally incorporated in 2012 as a nonprofit, Frank was one of the original directors and an officer of the corporation.  Frank is a kind and constructive person and he has earned the respect of everyone involved with WindowDressers over the years. 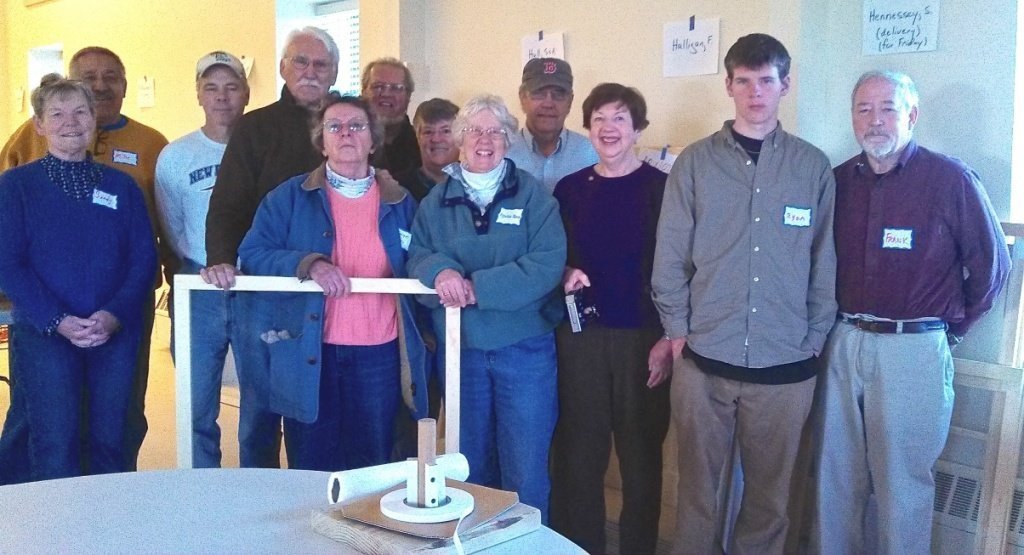 Former Board President Dianne Smith spoke of Frank’s skills as a teacher and his concern for the environment:

Community-building is what attracted Ray and me to WD 8 or 9 years ago, and it was Frank Mundo who inspired us.  We met Frank at an information  meeting in Belfast organized by Corliss Davis. Frank never took over the discussion but instead generated a sense of importance to the work and goals.

At the Belfast workshop that followed Frank was on site every day to lead us by his example. If we made mistakes, he gently corrected us, demonstrating the correct way to do the task.  His guidance left us with the confidence that we could run a workshop.

Frank was and is respected by all who have worked with him. His determination to find a way to improve the environment through window inserts was closely followed by building local communities. This idea brought people together and encouraged them to take the lead in developing their own home grown builds.

I so enjoyed Franks wit and humor and this will be greatly missed at Windowdressers.

Frank, thank you for all you gave to our organization and to the many people involved with it over the years.  We are so grateful for your service and wish you well now that you have officially said goodbye to the WindowDressers Board!