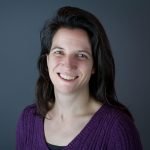 Since 2010, WindowDressers has grown from one church’s insulating project to a non-profit that mobilizes over 1,500 volunteers annually to provide low-cost insulating window inserts to thousands of customers across Maine and Vermont. In addition to keeping prices low with a participatory model, WindowDressers also gives 25-30% of inserts to low income households at no cost.

After 9 years of continuous growth, WindowDressers has hired Laura Seaton as our first Executive Director to help realize the organization’s vision of reaching more communities in Maine, and expanding beyond Maine’s borders.

Seaton has served the organization for two years as Program Director, and in that time has overseen a 22% increase in production, has doubled the number of local Community Workshops where the inserts are built, and has increased the number of inserts going to low income households by over 10 percentage points. Seaton will begin as Executive Director at WindowDressers on July 1st.

To date, About 4,000 households in Maine have had their windows insulated by WindowDressers. They have saved an estimated $3.6 MILLION in heating costs, over 1.25 million gallons of heating fuel, and tons of greenhouse gas emissions.

In 2018, WindowDressers hosted its first workshop outside of Maine, in Glover, Vermont. The 2019-2020 season will see four Vermont workshops. WindowDressers has developed a highly specialized & efficient production process, with materials prepared and stored at a centralized production facility, and assembled by volunteers at local Community Workshops. WindowDressers is thrilled to begin reaching new customers in other parts of New England, expanding the impact of this innovative, community-based model for energy efficiency.

WindowDressers Community Workshops are held in the fall and early winter and are taking orders now. Customers that want inserts built this upcoming season should place an order today.